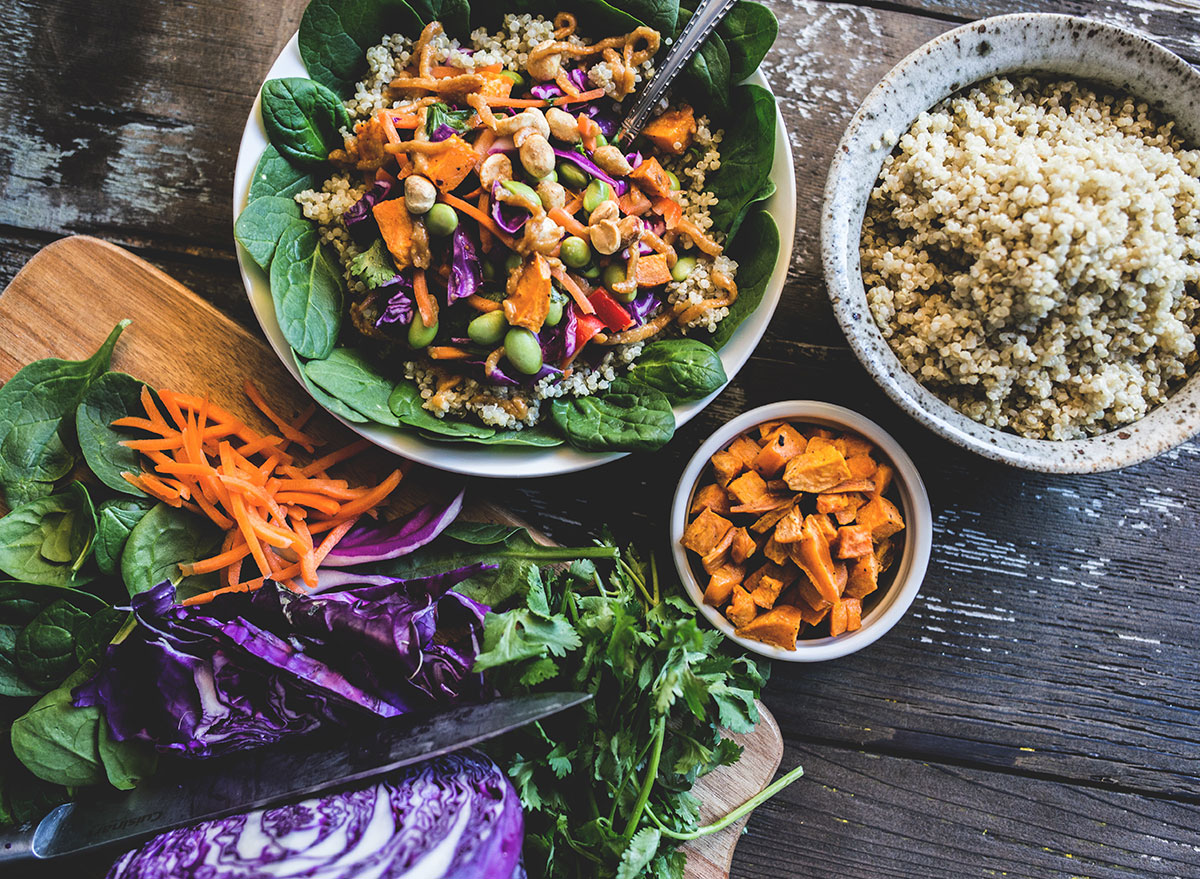 If you find yourself tossing more plant-based or whole foods—foods that derive from a plant—into your shopping cart, you’re not alone. Current data shows that the plant-food industry is now a $7 billion market, according to statistics from the Plant-Based Foods Association.

In fact, more than 71 million American households, which is 57% of all U.S. households, purchased plant-based groceries in 2020—a 4% increase from the previous year.

Meals that are based around minimally-processed, animal-free items—fruits, vegetables, whole grains, pulses (beans and legumes), nuts, seeds, spices, and oils—have been linked with a multitude of health benefits. And now, the American Heart Association (AHA) has recently released two research studies that provide further evidence to enjoy more meatless dishes.

Here are four reasons why you may want to consider adding some vegetarian/vegan/flexitarian/Mediterranean/plant-based specialties to your meal plan, and for even more healthy eating tips, be sure to check out our list of The Best and Worst Foods to Eat on a Plant-Based Diet.

Following a plant-based lifestyle today may keep your heart healthy down the road. One of the studies published in the Journal of the American Heart Association monitored the eating habits of 4,946 adults between the ages 18 and 30 over a 32-year period. The participants were asked to offer their detailed diet history while the authors rated their food choices on a scale. Beneficial foods (fruits, veggies, beans, nuts, and whole grains) scored the highest while adverse foods (high-fat red meat, fried foods, salty snacks, pastries, and soft drinks) were given low scores.

After taking other risk factors into consideration (such as genetics, smoking, and exercise habits), the volunteers who scored in the top 20% on the long-term diet scale had a 52% less chance of suffering from a cardiovascular condition three decades later. Furthermore, the adults who changed their food choices for the better somewhere between years 7 and 20 of the study were 61% less likely to be diagnosed with a subsequent cardiovascular disease compared to the participants who opted for more adverse foods.

“I am not surprised that consuming more plant-based foods would benefit cardiovascular health,” says Erin Palinski-Wade, RD, a certified diabetes care and education specialist and author of 2 Day Diabetes Diet. She explains that a plant-forward eating pattern not only means that your meals will be low in inflammatory-inducing saturated fats, but it boosts your intake of antioxidants, as well as fiber.

“Eating a diet rich in antioxidants can cool off inflammation—a driver of chronic disease,” she continues. “In addition, diets high in fiber have been shown to have a positive impact on both blood lipids and gut health, which may, in turn, reduce the risk of future cardiovascular disease.”

The second study from the AHA consisted of 123,330 postmenopausal women between 50 and 79 years of age who were not living with heart disease. The females filled out food questionnaires over the course of 15 years where the authors scored based on how closely they followed the Portfolio Diet, a plan that is devised of cholesterol-lowering plant foods (including plant proteins like soy, beans, and tofu, and soluble fiber foods like oats, barley, okra, eggplant, apples, and berries).

“We also found a dose response in our study, meaning that you can start small, adding one component of the Portfolio Diet at a time, and gain more heart-health benefits as you add more components,” said Andrea J. Glenn, MSc, RD, lead study author and doctoral student at the University of Toronto in a press release.

Last month, the American Academy of Neurology announced that even minimal servings of colorful, plant-based foods—including strawberries, blackberries, and oranges—could have the ability to reduce the risk of cognitive decline by 20%.

Thanks to certain types of flavonoids (a class of plant compounds that offer powerful antioxidant effects), cognitive impairment was decreased by 24% (seen in those who consumed more red, purple, and blue foods, such as cherries and blueberries) and by 38%—which equates to being three to four years younger than your true age—among the volunteers who ate orange and yellow fruits and vegetables.

“The people in our study who did the best over time ate an average of at least half a serving per day of foods like orange juice, oranges, peppers, celery, grapefruits, grapefruit juice, apples and pears,” said study author Walter Willett, MD, DrPH, professor of epidemiology and nutrition at Harvard, in a press release. “And it’s never too late to start because we saw those protective relationships whether people were consuming the flavonoids in their diet 20 years ago, or if they started incorporating them more recently.”

Researchers from the United Kingdom analyzed the data from 11 clinical trials (each study lasted for an average of 23 weeks) that examined the outcomes of following a plant-based diet compared to other diets. According to their findings, published in the journal BMJ Open Diabetes Research & Care, a plant-based (or sometimes a vegan) plan had both physical and psychological benefits for those living with type 2 diabetes.

For example, fasting blood glucose levels “fell more sharply” among the participants who ate little to no animal-based products while their symptoms of depression “improved significantly.”

“These findings make a lot of sense,” states Palinski-Wade. “If you have elevated blood glucose levels, a plant-based diet can have a positive impact on gut health.” The reason: Numerous plant foods (like onions, garlic, leeks, asparagus, and bananas) are packed with prebiotic fiber, a form of dietary fiber that feeds the “friendly” bacteria that reside in the digestive system.

“The metabolism of these compounds release beneficial short-chain fatty acids, which have been shown to reduce inflammation, along with improving insulin sensitivity, which ultimately improves blood sugar levels,” she explains.

And as a result, avoiding high and low blood sugar swings will help keep your emotions in check, too. “Since blood glucose regulation and gut health can have a direct impact on mood, a diet that balances blood glucose may also lead to improvements in mood,” adds Palinski-Wade.

Get even more healthy tips straight to your inbox by signing up for our newsletter! 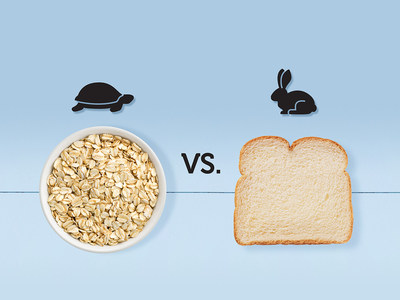 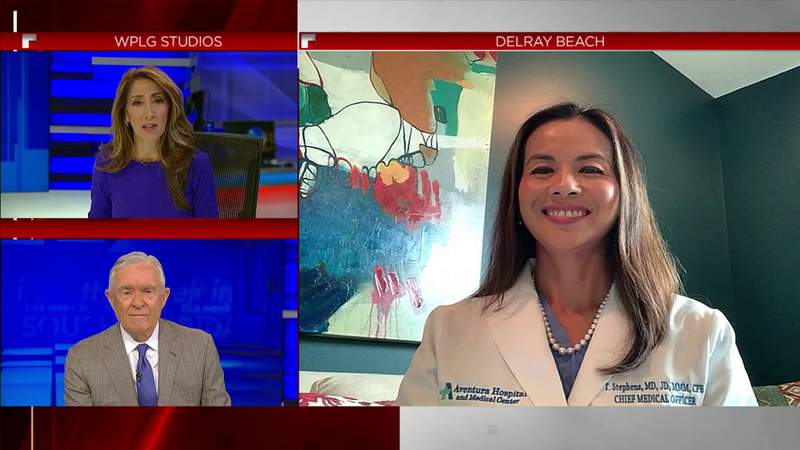